Home » Parenting » You Can Stop Rewarding Kids for Chores 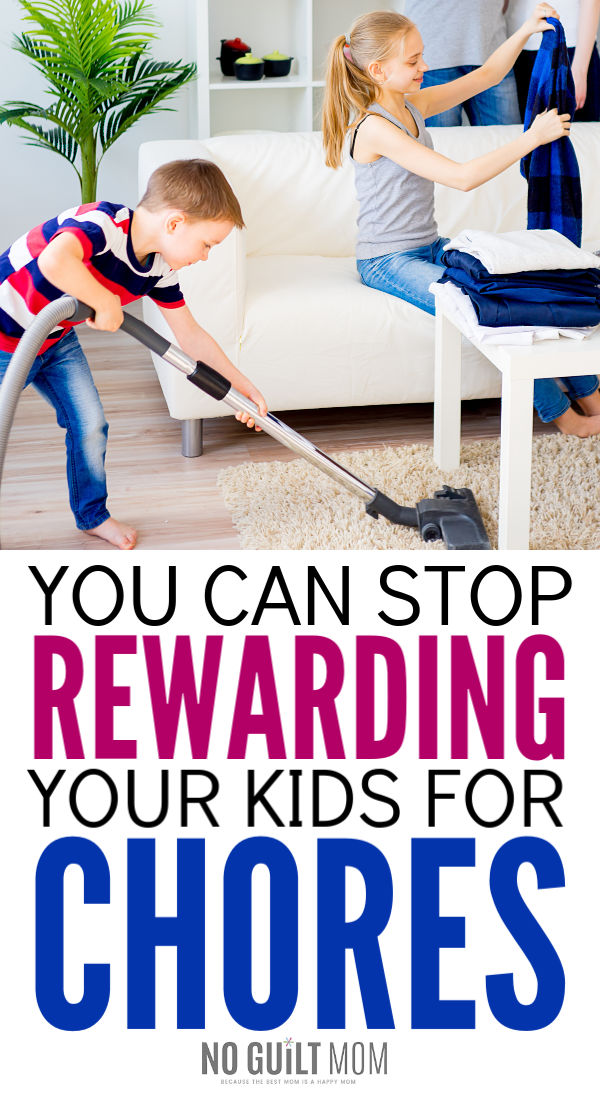 I’m not picking up my toys for forty-five cents.

Even though it was close to 25 years ago, I remember that chore chart affixed with Disney magnets to our white fridge.

My dad had broken apart every chore in our home, assigned it a monetary value and created this perfectly organized chart.

That amount seems small now, but at the time, my 10-year-old self was pretty stoked.

So I scanned the list and decided to start with dishes. I quickly scrubbed the plates, bowls and silverware and placed them in the drying rack. It took me 20 minutes.

Yes! I went back to the list and check it off. Fifty-cents.

Already…I was done with this.

Time for a break.

Fast-forward a week later and that was the only box I completed on the ENTIRE chart.

Not that my parents didn’t encourage, Oh.. they did!

They questioned and reminded me each day and I always replied, “I’ll do it later.”

But, I never did. In a few weeks, the chore chart quietly disappeared and my parents never brought it up again.

Why did the reward system fail?

Humans are tricky creatures and as much as we think we’re motivated by external rewards, we’re not.

Sure, they work in the short term.

But as a long-term solution, external rewards don’t work. This goes for every human – kids and adults.

Why? Because it becomes the responsibility of the person giving the reward to encourage the behavior.

The behavior stops as soon as the reward stops. And if the reward was never that appealing to the individual to begin with, the desired behavior fails to launch.

As much as our society wants to convince us, people simply aren’t motivated by money and external rewards.

What motivates kids instead…

According to the research, children feel motivated in three basic ways:

Simply posting a chore chart with a reward system – whether it’s money, prizes, or treats – doesn’t work because there is no sense of family community -it becomes a pay for play – and sometimes kids are being expected to do something they have not yet developed the mental skills to achieve.

So, why do we resort to rewards?

Ready for the bomb drop?

When we parents create a reward system for our kids to do chores, its us trying to exert control over the situation. Kids learn nothing about managing their own behavior through rewards.

Jessica Lahey, author of The Gift of Failure: How the Best Parents Learn to Let Go So Their Children Can Succeed, says “Many basic household responsibilities, such as walking the dog or taking out the trash, should be viewed as part of family maintenance, not as endeavors deserving of some grand hoopla or a grand reward. Everyone should contribute to what needs done around the house, and rewarding these kind of basic activities suggests that doing them is heroic as opposed to expected.”

How should we get kids to do chores?

We need a system that not only shows kids that expect them to do chores but also guides them in achieving them.

And this doesn’t mean posting a chart and asking them to check off tasks, but rather:

Is this harder than posting a list? Most definitely.

But the effects last much longer.

How to get your kids to do chores without rewards

We want chores to become a habit, not a task we need to constantly nag our children to do.

Because who likes that? I want to scream if I have to ask my kids to do something more than once. I feel like I’m talking to brick walls.

In his book, The Power of Habit: Why We Do What We Do in Life and Business, journalist Charles Duhigg, breaks down habit formation into three parts:

Say I want my kids to unload the dishwasher and load it without me having to ask. True story. Here’s how I do it:

I start the conversation with: I expect you both to unload and load the dishwasher every day. When do you want to do it?

If it’s immediately when they come home, we think of a cue that will remind them it’s time to unload.

For example, my son always comes into the house and wants a snack. After he finishes his snack, that will be his cue to unload to dishwasher – in other words to complete the action.

When the action is completed, what’s the reward? Maybe its:

All these rewards occur naturally with no intervention from me necessary.

All the control is in my son’s hands and that releases me from constantly nagging.

The job gets removed from my plate.

What happens if they don’t do the chore?

Since this is all about the helping the family, it becomes personal when kids don’t do their chores.

Instead of not receiving a reward, natural consequences occur. In the case of the dishwasher,

As parents, we have much more control than we give ourselves credit for. It doesn’t need to involve money or rewards.

With these consequences, kids internalize responsibility, develop empathy for others, and discover the real results of their actions.