Home » Parenting » Had enough of your kids fighting? 1 hack that will make them stop
Pin362
Share2
Tweet
364 Shares

Tried everything to get your kids to stop fighting? This simple reward system for good behavior might be what finally encourages them to cooperate. 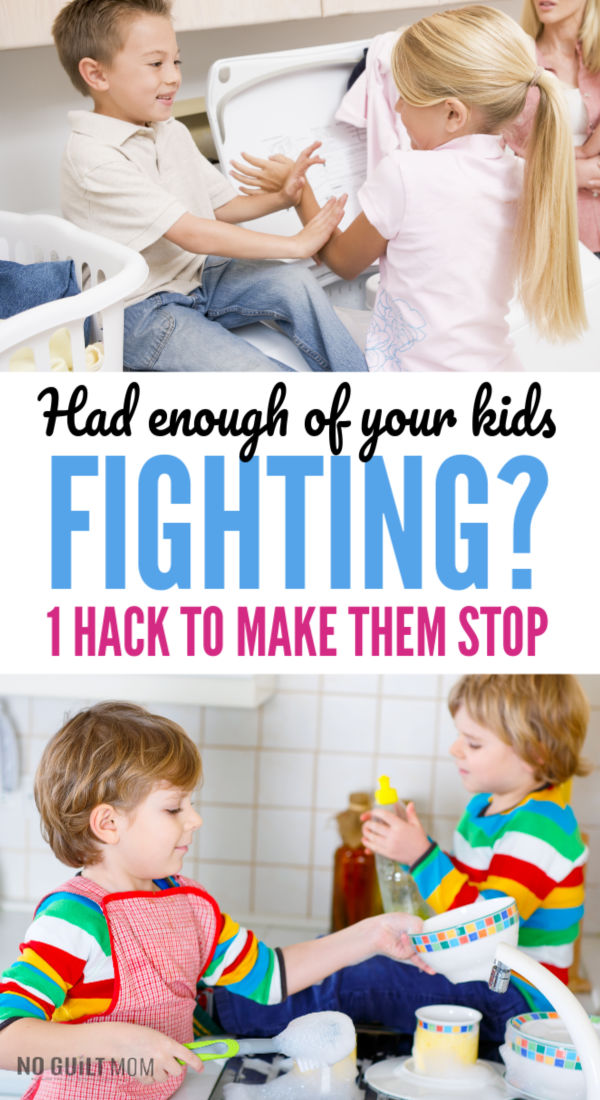 We put my nine-year-old daughter in charge of unloading dishes and my five-year-old son got the silverware.

Each time my kids unloaded the dishwasher, I could expect the clang of porcelain bowls being stacked in the cabinet.  A low mumble. Then, a high pitched scream followed by my son’s open palm connecting with his sister’s back.

Now, you would see this and think it lies with my son to control himself, and yes, it does to an extent.

Hitting is not allowed in our house. Each time my son hits his sister, I:

Because it was not just a question of my son controlling himself, it was also my daughter PURPOSELY pushing him to the point of anger.

I suspected this for a while, but had my suspicions confirmed a few weeks ago….

What I was missing…

My son had taken the silverware caddy over to the counter to start unloading. He was peacefully doing his job.

I watched as my daughter put all the plates back in the cabinet and then started loading the dirty dishes into the dishwasher.

“Erik, I need the silverware bucket.”
“I’m still putting it away,” he replied.

Not knowing that I was spying from the living room, my daughter strode over to the counter, picked up the silverware caddy and dumped all the utensils in front of him.

As she walked back to the dishwasher, carrying the caddy, I saw a huge smile spread across her face.

Read: 6 Positive Discipline Steps That Will Change Your Child’s Behavior

That’s when I realized WHY my positive discipline with my son wasn’t working.

My daughter held equal responsibility for the dishwasher fights. She knew how to push his buttons.

I plunked down in my chair at family brunch one day, dug into my sausage & spinach frittata, sighed and laid out the whole problem for my sister-in-law.

She suggested a little positive reinforcement… aka a reward system for good behavior.

And let me tell you, it’s working out beautifully.

But first, a warning

I am the first to tell you that you shouldn’t reward kids regularly for tasks they’re supposed to do.

Stuff like feeding the dog, making their bed and doing their chores.

A simple reward system can work incredibly well if you are looking to change behavior in a positive way.

Especially, if every other positive discipline strategy you’ve tried has failed.

Here’s what to do:

Not three, not ten… one.

Even though there may be a ton of behaviors we seek to improve in our children, if we focus on many we might as well be focusing on none.

Why is that?  One reason for it is that our memories aren’t that spectacular.

I don’t know about you, but I get so excited about all the changes I’m going to make that I set a bazillion goals and then…

To create positive changes in our homes, it best to focus on one goal at a time.

For us, our one specific goal is:

You must cooperate with no screaming or hitting.

That’s it. If they do that, they don’t get their reward.

But don’t think I give them something each time they act like civilized people.

No, they still need to work for it.

I knew this could be a motivator for them, so I changed the rules on our fro-yo night.

No longer would we make Thursday night fro-yo night, instead they would need to earn our fro-yo trips.

Every time they showed cooperation, they earned a letter to spell fro-yo on our kitchen whiteboard.

For example, the first night they earn an “F”, the second night an “R” and so on…

Once they spelled fro-yo, we could go.

If they didn’t cooperate, they simply didn’t earn a letter.

3. Turn the reward process over to your kids

You and I – we have enough on our plate.

If I have to keep track of one more thing, it’s simply not going to happen.

So, for this reward system, I made my kids responsible for writing the letters on the whiteboard.

According to psychologist, Jim Taylor Ph.D, the way to raise independent children is to show confidence in your children’s capabilities and teach them that they have control over their lives.

A few things happen when our kids take control of the reward process:

Once they see success, up the expectations

It took my kids 6 days to earn the 5 letters in fro-yo… and believe me that comes from giving them close to 12 opportunities to earn letters.

But, they did it and we went out to Menchies.

Now, it becomes a little harder to earn a letter.

I’m not offering multiple chances each day… just one.

The point is that I want the behavior to eventually become a standard and not rely on a reward to see it.

Eventually, we will phase this reward system out.

When we make a system simple, put the responsibility for fulfilling it in our kid’s hands and increase expectations, we can create a positive change in our kids behavior.

I believe reward systems are best as a last resort. Even though this strategy doesn’t require too much work, it does take your attention to maintain.

Before using rewards, try positive disciplines techniques first. You may find that your child responds really well to those and no prizes are needed.\

But if not, there’s no harm in a little reward.