It’s the weekend and you’ve looked forward to it the whole week.  As you lie in bed, blissfully asleep with no alarm set, a nudge makes you wake up.  A little voice says, “Mommy.. I’m hungry.”  You look over at the clock. 5:45am.  What!?!  It’s the weekend!  Why can’t my child sleep in? I’m going to be so grumpy.… Here are 7 strategies we use in my house when our kids wake up too early. 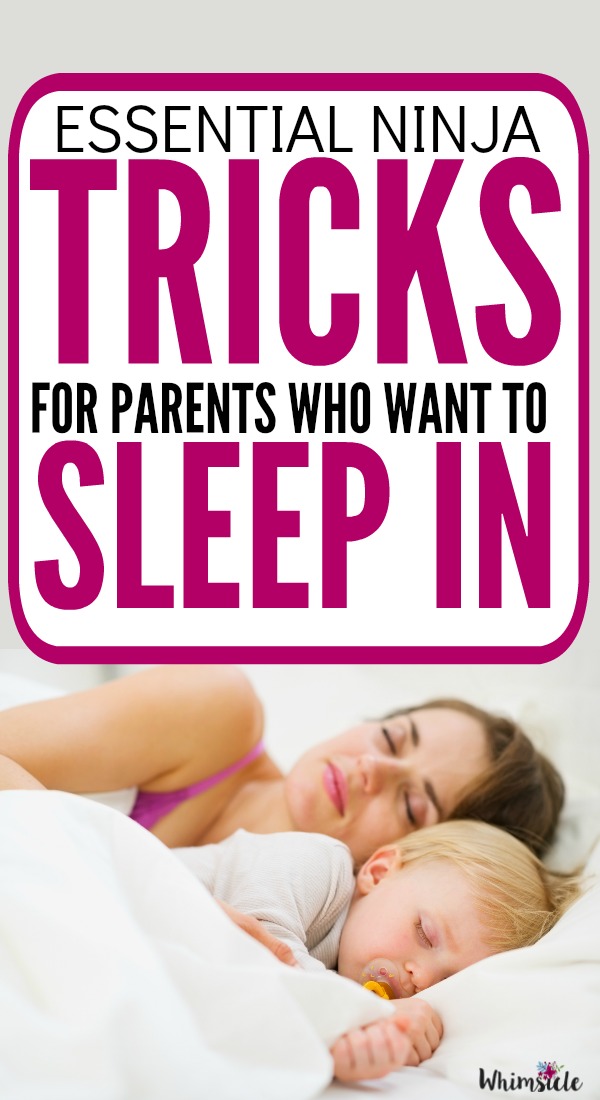 This post includes some affiliate links for your convenience – which means if you click a link and make a purchase, I receive a small commission which helps keep my blog up and running but you don’t pay a penny more!

Every morning, at 5:45 am, my son comes over to our bed.  He’s 4-years-old and has been waking up too early since birth.  We have the exact opposite problem with our 8-year-old daughter.

I used to co-sleep with him.  He still fits perfectly in my arms when I lie in bed and enjoy his cuddles.  When he was a baby, he snuggled against me and nursed back to sleep.

Now that he’s 4, we still have the same problem.  That same baby hunger exists, but now I have to actually get out of bed to feed him.

Not kidding here, the kid eats 3 breakfasts.  Why can’t he just sleep in like our daughter??

My husband or I stumble out of bed and head downstairs to pour him a bowl of raisin bran crunch – if it’s a weekday. But on weekends, we like to extend a our sleeping time just a little bit longer.

Here’s what’s worked for us over the past 4 years:

I treated my son’s early wake-ups like a science experiment.  I always came up with elaborate theories as to why he might be waking up early.

Maybe he can hear me when I go check on him at night.

Maybe his pajamas are uncomfortable.

Maybe he has a rare form of cancer whose only symptom is to wake up early….

Ya, I’m crazy.  But tell me I’m not alone in those crazy thoughts, please.

Cancer fears aside, I needed an answer.  How could I get more sleep??

My husband’s opinion: “Maybe he is just one of those kids who wakes up early.”

Once, when my son was a toddler, I was watching television when an ad for a diaper brand came on.  The commercial asked, “Is your baby waking up in the middle of night?  It could be his diaper.”

Yes, I thought! The diaper! My next shopping trip, I picked up a box of overnight diapers – ones that were thicker and more absorbent.  My theory was that his diaper was getting too wet and then he got cold… which caused him to wake up.

When we switched to overnight diapers, I was so excited going to bed that night.  I thought, “Yes! This is the night I’ll finally get a full 8-hours of sleep!”

Did I?  Umm… no.  He still woke up in the middle in the night and walked on over to our bed.

However, using overnight diapers led to a drier bed… so I’m calling this one a win.

Blame it On the Sun

My next theory was that my son woke up at first light.

When my daughter was little, we knew the extra light in her bedroom woke her up.  So we, bought a pair of blackout curtains for her one window.

These helped her a lot.  However, I always needed to make sure that I taped the curtain against the wall. If any light made it’s way into her room, she would wake up in an instant.

I thought about this for my son, but ultimately decided against blackout curtains for him.  At the time, he woke up at 1am, left his bedroom and spent the rest of night in ours.  The sun wasn’t the issue since there is zero sunlight in the middle of the night.

I asked everyone I knew for advice on how to get him to sleep longer.  My mother-in-law suggested a white noise machine.  It worked for my husband so it might work for my son as well.

We brought this humidifier into his room and cranked it on.  The white noise gave us the needed cover to sneak out of his bedroom as he fell asleep each night.  It muffled every bump and jostle as we tip-toed out of his room at bedtime.

Did he sleep any longer because of it?  No… unfortunately not.

Teach Him to Stay In Bed

My friend Heather bought her daughter a special alarm clock that would teach her when it’s time to wake up.  It worked like a stoplight.

Green means get up and greet the world.

There’s also this method for older kids who can read numbers.  As a bonus, no special alarm clock is needed – just a normal digital clock and a post-it.

Ok, I admit.  I haven’t tried this method.  One, because I’m lazy and two, I secretly have come to like the morning cuddles.  I just want them to come a little later in the morning… 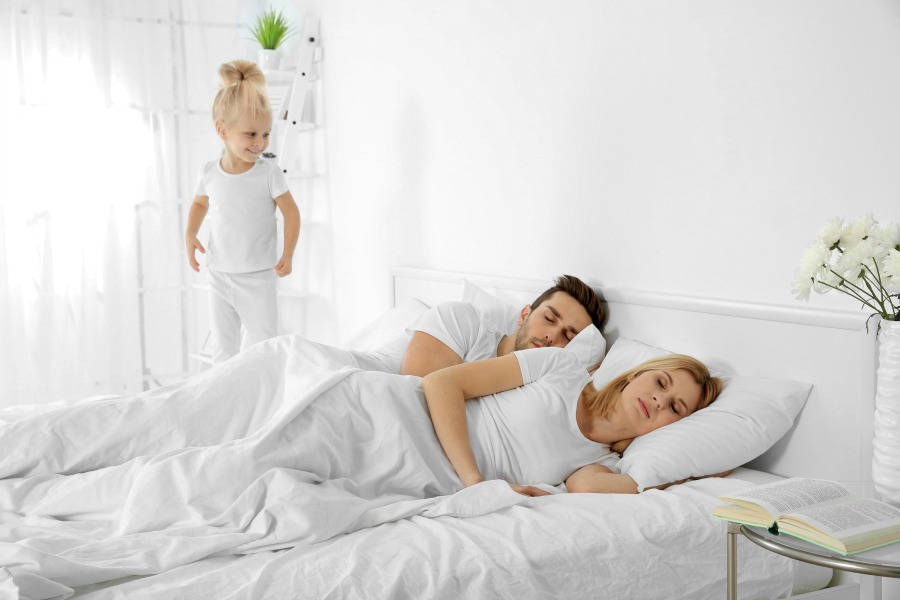 Bring on the iPad

Over the years, I’ve become a bit more accepting of my son’s early mornings.  I’m starting to agree with my husband that maybe he is just an early riser.

But, just because he is, doesn’t mean I have to be.  Lately, when he comes over to our bed, we’ve been turning on a Peppa Pig or Paw Patrol for him in our attempt to get more sleep.  And you know what… it totally works.

Most of the time, he will watch two episodes which stretches our sleep by a whole hour!

OK, here’s the shocker.  I’ve come to realize that if I’m getting out of bed every morning regardless, then I might as well use it to my advantage.

Knowing that my son will be over to wake me up at 5:45am has made it easier for me to make my morning workout.

Here are my options:

a) Wake up at 5am for barre, go and come back feeling accomplished.

b) Wake up at 5:45AM, barter with my son for more sleep time and end up a grumpy mess.

So now, I just wake up earlier and my husband takes care of my son’s breakfast when I workout.  My hubby is much harder to wake up than I am so he usually can stay in bed until 6:15 before trudging down to the kitchen for first breakfast.

It can be so frustrating when your child wakes up way too early.  You want to sleep longer and you should try out everything you can to get those extra hours.  However, if nothing works, you are still an awesome parent and after a while (for me it took 3 years) you may be able to find the bright side the early wake-ups.

Article Name
Kids Wake Up Too Early? Essential Ninja Tricks for Parents Who Want to Sleep In
Description
Just go back to sleep! 7 tips for when your kids wake up way too early and won't sleep in. The best way to deal with your little early riser.
Author
JoAnn Crohn
Publisher Name
Whimsicle
Publisher Logo