Home » Parenting » Consequence for Hitting a Sibling: The simple method that teaches kids to communicate, not hit

One of your kids just hit the other… what’s an appropriate consequence for hitting a sibling?  Instead of using punishment – which can damage your relationship with your child – this method deepens the parent child bond and teaches kids to respect each other. 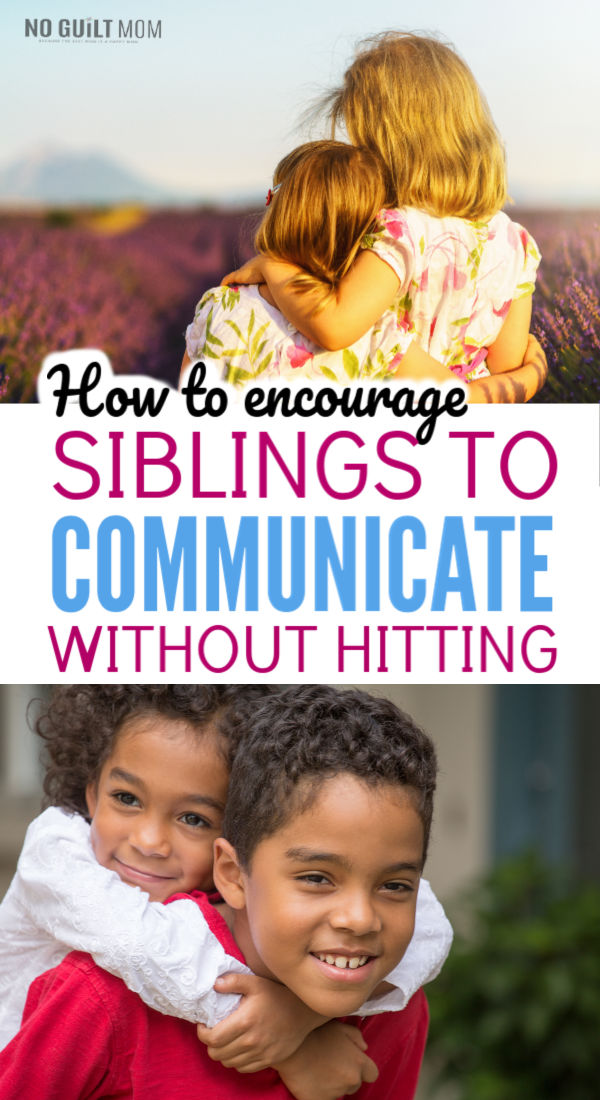 Not more than 2 seconds after they hop in the car, the screaming begins.

“NO SISSY! YOU DON’T KNOW WHAT YOUR TALKING ABOUT”

He reaches his little arm across the space in the bucket seats between them and hits her.

That’s when I intervene.

I don’t know how school bus drivers do it. How do you discipline 30 kids when you’re trying to keep safe and focus on not veering your large yellow, monstrosity off the road?

I’m in a Toyota Highlander with only two children and I’m ready to lose my mind.

My Kid’s hitting is driving me insane

And he only hits his sister.

Lunch aides stop us when we visit the school and compliment him on always saying please, thank you and being so polite.

However, with his sister, he lets his inner chaos monkey reign.

But he’s not solely responsible for the hitting.

I say that and I know you might cringe. I never want my son feel its OK to hit and that my daughter somehow deserved it.

But siblings know each other so well. My daughter thinks it’s funny when my son loses his temper and she knows how to twist his buttons until he rages.

When we wonder how to stop siblings from fighting  – particularly hitting by one sibling – we have a two-pronged problem.

Yes, we need to address the hitting behavior first in terms of:

But, we also need to address the other sibling, because usually there are ways they can tweak their behavior so that they don’t get hit.

Is there an appropriate consequence for hitting a sibling?

After being a teacher, I’m 100% for positive discipline when disciplining my own children. We focus on problem-solving and natural consequences to misbehavior.

The goal is to improve behavior and problem-solving skills – not to punish.

Punishment has shown to only increase shame in kids while leading to no change in behavior.

But this hitting mysitified me. I knew that:

How do I discipline for that in a way that:

But huge problem: my own reaction.

I hate it when he hits. I get mad and all I want to do is yell, “STOP HITTING YOUR SISTER”

Argh!!! Is it normal for siblings to fight all the time?

Honestly, this is how I was handling the scenario and it was doing nothing.

My exuberant son became withdrawn, shameful and sad. He would say, “Sorry Mommy”

And then hit his sister two minutes later.

Dr. Laura Markham, the author of Peaceful Parents, Happy Siblings, says that its hard to help our kids manage big feelings because most likely, we’ve never learned to manage our own.

When we were growing up, hitting was bad and meant that you were either a bully or a horrible person.

We buried the emotions and hoped they would never pop up. It didn’t work. Unresolved feelings usually come up in other ways – usually in the form of depression and anxiety to those of us who could never find an outlet.

We started to judge ourselves – and anger – as wrong and to be avoided at all costs.

If you’re angry, you don’t show it.

You keep the peace.

You swallow it and tell yourself that you’re overreacting and its no big deal.

Or you replay the situation again and again in your mind analyzing how you could have done things differently.

This mental mind game sucks. It zaps you of energy.

If we’re wondering how to help siblings get along, we need to first acknowledge the tough emotions.

Instead, validate your kids’ emotions so they can learn to deal with them in a healthy way and not internalize them.

Here’s what to do instead.

Immediately remove them from the situation

That’s why when there are siblings fighting,  I outlaw talking until we get to the destination. This works two ways.

Immediate action – it is something you can do immediately that sends the signal that behavior isn’t tolerated
Thinking time – for both me and them. I can think through my next steps and they can digest the situation.

When I get home, I separate my kids and talk to them individually.

With my son, I name his emotion and then we brainstorm ideas on how to deal with it.

“You hit your sister. That shows me you were really angry”
“She makes me SO mad”
“I know. What are some things you can do when you’re mad?”
“I dunno. I forget”

Depending how much time I have, I either remind him or I leave him to go talk to his sister so he can “remember.”

So far, the tactics he uses to deal with his anger are:

Ask: How do I make it better?”

I used to have him apologize, but then I read this article about a preschool where none of the children say the rote “I’m sorry” to each other. Instead, if an accident happens, such as hitting, the kids are told to look for concrete solutions.

Now, he looks for how to make it better.

The most important thing is that he comes up with it himself and then does it.

It’s going to be messy

This process may not work the first, second… even tenth time you do it.

My son’s hitting exhausted me.

You might think: This whole teaching my kids to manage their emotions is BS and I’m a pansy for not just punishing them or sending them to their room.

This is how we were punished as kids and its a tough thought process to break.

Remember: This isn’t punishment, this is discipline.  There’s no appropriate consequence for hitting a sibling.  It’s all teaching.

But then, I noticed it.

We were driving in the car one Sunday afternoon and his sister made a mistake about the name of the donut shop that Nana and Papa bought donuts from.

She said it was Bosa Donuts. I braced myself.

I expected him to yell at her and then reach out to hit her.

But this time, he calmly said, “No, it was Dunkin Donuts Camdyn.”

If I wasn’t buckled in, I would have fallen out of my seat.

Immediately, I jumped in: “Erik, that was awesome how calmly you corrected your sister”

And I left it at that.

Lately, there have been more frequent incidents of him acting in a calm way that I can compliment.

And it’s going to happen for your kids too…

Each time your child hits his or her sibling, instead of thinking of a consequence for hitting their sibling:

It’s not fancy. You may feel like it isn’t working. This is the only discipline for hitting a sibling you need.

But whoa, when it kicks in, it’s like a wizard who got top marks on all her OWLS popped in, waved her wands and transformed your child.