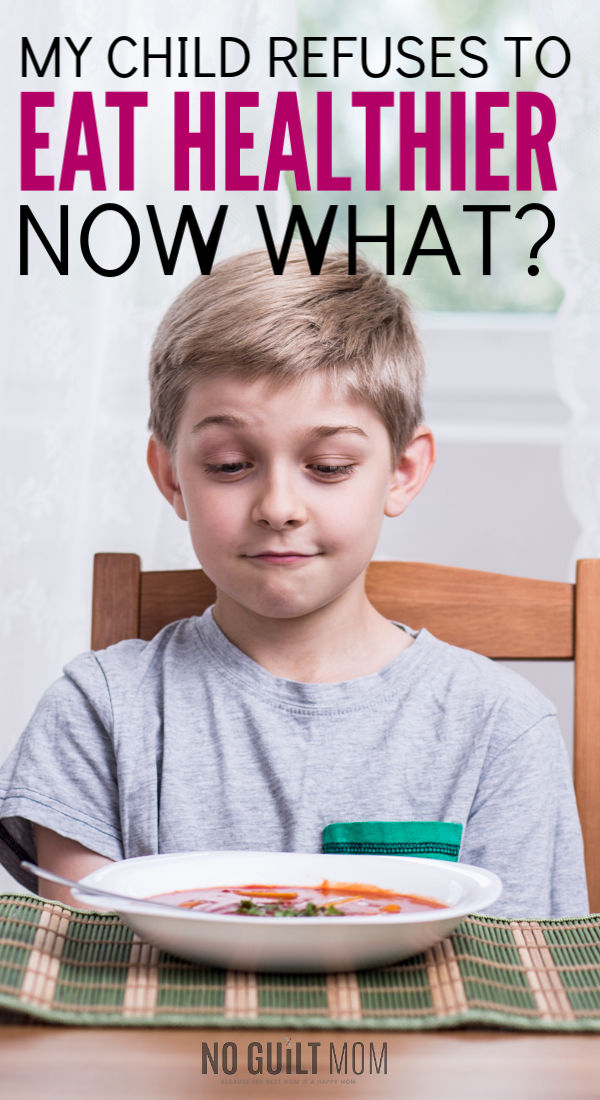 Kids and food can be a never ending struggle. When we want them to eat healthy, all they want is Goldfish crackers, trail mix mixed with m&m’s and bagged popcorn.

All the processed foods and none of the fruits and veggies.

And I’m not saying that any of these foods are bad by themselves, they’re not. I buy them from Costco and we use them for school lunches and snacks all the time.

But when they become all kids will eat and when every snack time becomes a negotiation, that’s when we run into issues.

“Mom, can I have some goldfish?” asks my son one afternoon.

“It’s almost dinner, you can have a banana or an orange.”

And because I’m tired as well, I let him talk me into a small box of yogurt raisins.

Because raisins are fruit, right?

Then, there is my nine-year-old daughter.

Although she has improved her eating habits in the past few years, when left to her own choices she gets soda, cheese pizza, hot dogs, potato chips and french fries.

In the interest of family harmony…

We haven’t fought her too hard on her choices when we dine out.

When we do, it leads to sulking, crying and basically, and not letting us enjoy any part of our meal.

While we do talk to her about this not being OK and she apologizes afterwards, the next time we eat out, we’re so scarred from the past experience that we don’t bring food choice up.

So it goes. It becomes an endless cycle of we as parents deciding to be tough one moment and then weaklings the next.

Then, a few months ago, my daughter started complaining of stomach aches.

At first it could be attributed to something specific such as:

But when they became more frequent, I worried.

This went on for months. I dreaded something was very, very wrong and yet I was too afraid to go to the doctor to confirm it.

Or have her doctor tell us that I was the problem.

That’s what I was really afraid of: that her stomach pain was all my fault.

I knew that she shouldn’t be eating all that junk, but how in the world do I stop her without making every meal time a fight or giving her a complex?

Time to bring out the big guns

Friday afternoon, after I wrote this post on how I put off going to the doctor myself for over a year due to fear, I made my daughter an appointment with the pediatrician.

Maybe, she needs to hear about her nutritional choices from an authority figure other than her parents.

We sat down in the office and she described her symptoms to the doctor who listened intently and I shut my mouth.

Well, I figured that I was already talked out. She knew what I thought of what she ate. I needed her to have complete control of this appointment so that the advice she received would not be influenced by my opinion.

Isn’t this everything I’ve been telling her?

That night at dinner…

Change is hard. Particularly when it comes to changing our diet.

Anyone who has ever taken on a nutritional change knows the pain.

Being Friday night, we decided to go out to dinner.

As my daughter looked over the kid’s menu, she didn’t like her choices.

Ignoring the doctor’s suggestions, she went for a Sprite and corn dogs.

Then it hit her.  Her stomach hurt not more than 5 minutes after those first sips of Sprite.

I rubbed her back and she pushed me off. I tried to console her, but tears streamed down her face.

I did the only thing I knew how – ordered a glass of wine and tried to make it through the meal.

But then once she calmed down…

With stomach problems of my own – and my tendency towards anxiety – I realized that I wasn’t the best person to handle this issue.

My husband stepped in.

He pointed out that it’s a really good thing her stomach hurt because now she knew one of her stomach ache triggers – soda.

From that night on, she has carefully evaluated everything she eats.

When we went over to my in-laws house, she passed up the Goldfish crackers and asked for a bowl of fresh fruit.

For breakfast this morning, she happily drank a almond milk smoothie FULLY KNOWING that I threw a big handful of spinach in the blender.

(Ok.. she doesn’t know about the unsweetened almond milk, but I was able to disguise that one pretty well with some frozen bananas.)

How to change kids eating habits when you’ve failed before

My point is, due to my previous experiences with food choice and stomach problems, I was not the best person to change my daughter’s habits.

We had to seek outside help.

Someone that we knew she would listen to.

Because when it comes to changing a tween’s habits, they have to WANT to do it. At this age, they are too self-sufficient, too smart and know how to get their hands on unhealthy food when we’re not around.

It has to be completely self-directed. They have to want to change – and their reasons for change might not be our reasons.

If you’re trying to change your child’s eating habits, I know how hard it is.

You are amazing, but its OK to look outside your family for help. Whether it be a doctor, family friend or even one your child’s peers who eats healthier.

Your power as a mom is still there. You’re the one making change.