Home » Style » Confidence » When I was Too Embarrassed to See a Doctor: My Ulcerative Colitis Story 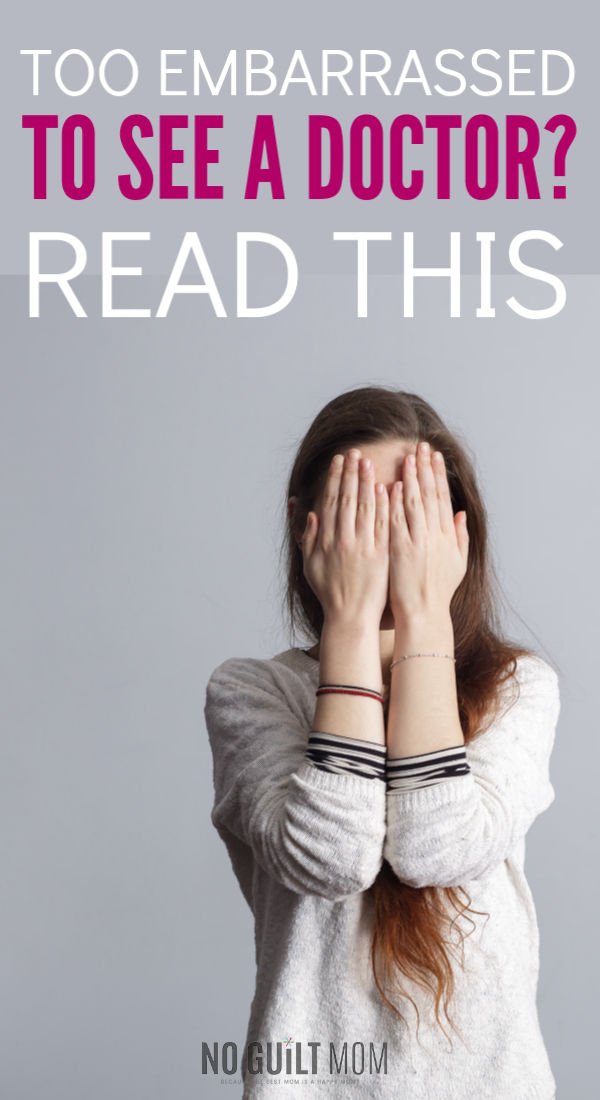 No one wants to talk about embarrassing health issues. I’ve put off writing this post for so long, because it’s well… uncomfortable to talk about in SO many ways.

But, when I had all these symptoms, I lay in bed while my husband and kids slept, looking for posts like this on my phone. And I couldn’t find anything that addressed it.

So here goes… and as a heads up, yup, I’m going to talk about poop.

How my symptoms started

About 2 years ago, as I was helping my brother and sister in law move into their new house, I felt uncomfortable…

I’ll spare you all the details, but ultimately I chalked it up to eating something that disagreed with me.

Perhaps I had a gluten sensitivity – tons of people seem to have that. Or maybe it’s a bug.

Within a few hours, the urge to run to the nearest toilet disappeared and I didn’t think any more about it.

But then, it happened again. And again.

During one trip, I saw blood.

Now, in my mind, blood only means one thing – I have colon cancer.

(Spoiler: I don’t have colon cancer)

But that’s what my mind fixated on. I googled like crazy, looking for symptoms like mine, searching for personal stories.

Yes, WebMD came up on my search with its never helpful list of possible conditions.

However, I resisted calling my doctor.

I reasoned that if I called the doctor it would definitely involve a rectal exam.

You would think after having two children that wouldn’t bother me. When you’re pregnant your body is no longer your own and you submit yourself to exams for the health of your child.

This body was entirely my own and I reasoned that if this problem didn’t go away BY ITSELF, I had some incurable disease.

When I finally went to the doctor

After all my internet research, I had myself convinced that it must be a fissure causing the blood loss – one that wasn’t healing on its own and that I needed a prescription to fix.

Got it. Not life threatening. Ok, I’ll go in.

By the way, doctors are just as good as distracting adults as they are kids. For the exam, you dress in a it pale blue checkered gown, lay on your side with your knees up to your chest and the whole thing is over in seconds.

And my doctor did indeed diagnose a fissure. She prescribed me a cream and it seemed to get better.

Until a few months later, when the blood returned and the bathroom trips became more frequent.

Around this time, my family and I went on vacation to Big Bear, CA – a gorgeous mountain village.

Every day would follow the same pattern: I woke up in the morning completely fine. But around noon, the bathroom trips would start.

One day, we took the ski lift up Big Bear Mountain with these stunning views.

I was scared to go on a hike because I feared I wouldn’t make it to a bathroom in time.

It became completely normal for me to use the toilet 20 times a day.

Nighttime was the worst. As I tried to get comfortable, I would suddenly need to hop out of bed. There were some close calls

I still thought it was gluten.

I kept telling myself that if only I could be strong enough to resist the foods that caused me trouble, I wouldn’t have this issue.

It was all my fault.

And honestly, it was all my fault, but only because I wouldn’t get my ass to a doctor.

This lasted a few more months until I attended a blog conference in Portland.

Yes, I was still running to the bathroom and I had decided by this time it wasn’t gluten, it was dairy.

I picked the cheese off my sandwiches. Switched to soy milk in my chai lattes.

At the conference, my friend Maureen came up to me and said, “Are you OK? You look tired.”

I was tired. Honestly, I couldn’t wait to go to bed each night. 9PM hit and I wanted to collapse.

But I couldn’t, because that’s when my symptoms hit the hardest and I would be running back and forth to the bathroom.

At my physical that month, my blood test revealed the reason for my tiredness: anemia. In hindsight, my gastro issues were causing so much bleeding that NOW HAD ANEMIA.

My general practitioner prescribed me more cream for the fissure. But I wasn’t telling her all my symptoms. She never knew about the constant bathroom trips and never ending diarrhea.

Yes, I had all these crazy symptoms, but I could live with them.

I was uncomfortable but I couldn’t say it caused me any real pain.

That is, until November. That’s when the cramping started.

Think menstrual cramping but more intense and EVERY day.

I snapped at my kids because the pain and the pressure became unbearable. I lay in a huddled ball on the couch every afternoon. We couldn’t go anywhere, do anything… We were all totally at the mercy of my bowels.

Ok, this has to stop. I finally called my GI.

They couldn’t get me in for a month.

Suddenly, the embarrassing procedures, thought of having to do a stool test and having to describe my poop to another person didn’t seem so bad.

I hounded that office. I called every morning inquiring about cancellations.

After two days, they had an opening.

I remember laying in my bedroom with my daughter who was home sick from school that day and I couldn’t move. My body felt so heavy. My belly cramped.

I don’t think I was ever so happy to go to the doctor.

After a series of questions, she sent me home with instructions to do a stool test to rule out any bacteria or viruses and gave me a blood test as well.

Then she added, “I’m going to prescribe you the bowel prep as well. Because if the stool tests don’t find anything, we’ll need to do a colonoscopy to rule out inflammatory bowel disease”

Oh great. I don’t think I’ve ever been so willing to bring my poop back to the lab in the hopes it would show something so that I wouldn’t have to get a colonoscopy.

My blood test unfortunately was not good. It showed dramatically elevated levels of CRP which is a protein that one’s liver produces when there are high amounts of inflammation in the body.

She called with those results on my birthday (Happy Birthday to me!) and scheduled the colonoscopy for that Friday.

Now if you’ve ever heard stories of colonoscopies, you might have heard the prep is the worst part.

To me, comparing it to everything I’ve been through in the past year, the prep was nothing.

You drink this intensely grape flavored drink and then follow it with 32 ounces of water. That is no small amount!! The hardest part of prep was trying to get all that liquid into my stomach.

You do this twice the night before the procedure – each time is followed by about an hour of running to and fro between the toilet.

Can I just say, the morning of, I was terrified.

Terrified of having a tube stuck up my body, but even more terrified of what they might find.

I had these visions of me being under and my GI docs talking with one another saying, “It’s such a pity. She’s so young. This is going to be a horrible thing to have to tell her.”

I was convinced I was dying.

In my more rational mind, I had started researching inflammatory bowel disease and realized that the symptoms of Crohns and Ulcerative Colitis pretty much mirrored my own.

The difference in treatment between the two is that Ulcerative Colitis is curable – by removing the entire colon – and Crohn’s affects the entire digestive tract and has no cure.

Based on the life I was living, removing my entire colon didn’t seem like that horrible of an option.

Waiting there before the procedure, IV in my arm, my doctor came to do his pre-procedure chat.

In his very calm, doctor manner, he replied, “Let’s see what we find.”

He walked with me as my bed was wheeled back into the procedure room. They asked me to lay on my side. I started panicking and telling them, “I am so freaked out.”

The nurse shot a milky white substance into my IV. “Well, let’s just fix that right now”. I think she was pretty happy to shut me up.

I woke up in recovery 30 minutes later hearing my husband’s voice. “Jo. Jo.”

Looking up at him, “Do you know what it is?”

“The nurses are saying that its not Crohns”

Phew… I breathed a sigh. My doctor came over and told me, “You have ulcerative colitis. It effects your ENTIRE large intestine except a very small part right where it meets the small intestine. I would say your case is moderate to severe.”

Wow, it’s like those drug commercials you see on TV – “for the treatment of moderate to severe ulcerative colitis”

He gave my a high dose of Prednisone – which I weened off over 3 months -and a drug called mesalamine.

Within 2 days, that prednisone knocked my UC into remission.

When I described it to my mom, I kept repeating “It’s like living a new life.”

Today, I’m still in remission. It’s been less than a year, but I’m hopeful.

Looking back, I lived with those awful symptoms for over a year all because I refused to see a GI.

All because I was afraid of a little stool sample and colonoscopy – neither of which was horrible.

If you are embarrassed to see a doctor…

I get that. But here I’m hoping that laying out my entire embarrassing health story gives you the courage to overcome that fear.

You don’t deserve to live with pain.