Your child is 7… why is she still having meltdowns?  Here’s how to deal with tantrums in older children. 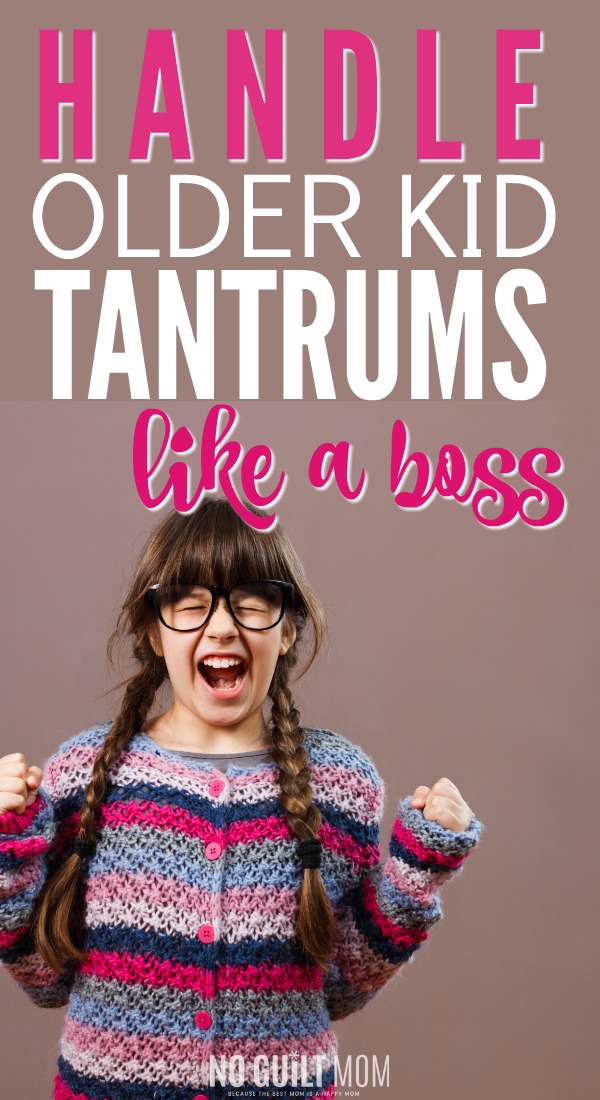 You’re walking past the Disney store in the mall when your 7-year-old daughter points to a dress in the window.

It’s Elsa and oh man, she wants it.

Puh-leese can I have the Elsa dress, mommy?

You know this dress must be at least 80 bucks. No way are you buying that. So you respond,

“That’s not fair! You never let me get anything!”

Her face smushes up, turns red and she starts yelling louder.

“You said I could get an Elsa dress last time we were at the mall. It’s not fair! I want one! My friend Bridget has one. Why can’t I get one?”

People are starting to stare.

The tears start rolling down her pink cheeks. Not just little whimpers, but loud, wailing screams.

You can feel your anger rising. How dare she pull this in the middle of the mall!

What can you do that doesn’t involve you flipping your lid?

Your daughter is having a tantrum. Wasn’t this supposed to stop when she was a toddler?

What’s the meaning of this?

Dealing with Two Kinds of Tantrums

According to the book, The Whole-Brain Child, how you deal with temper tantrum depends on what kind of tantrum your child is having.

The lower half of the brain starts at the bridge of your nose and goes down.

It contains your brain stem which takes care of breathing, heart rate – all those essential keep-you-living functions.

This part of the brain also controls your fight-or-flight response.

When you see a toddler melting down in public and totally out of control of her emotions, she is having a lower brain tantrum.

The upper part of your brain deals with the more executive functions: reasoning, morality, and judgment.

Melting down in front of the Disney store because she couldn’t get the Elsa dress was probably an upstairs tantrum.

These tantrums are fully reasoned by the child and are a calculated move to get exactly what she wants.

Not every SINGLE tantrum an older child has will be an upstairs tantrum. If you see that your child has truly lost control of her emotions, the downstairs brain has taken over.

How to Deal with Emotional Tantrums

If you see that your child has no control over her emotions, the best way to calm her is to:

How do you do that?

Simple. You need to get your child thinking.

…which means first acknowledging the anger and then questioning to help her connect her very strong emotions to rational thought.

For example, say your five-year-old is screaming at you from the backseat because instead of going to her favorite restaurant – Jason’s Deli – you told her you would be eating at home tonight.

Mom: “Sweetie, why are you crying?”
Daughter: I’M CRYING BECAUSE OF YOU!!!
Mom: ”Well, you shouldn’t be upset. It’s OK to eat dinner at home. You are being very ungrateful right now’
Daughter: “BUT I WANT TO GO TO JASON’S DELI!!! WAAAAAA!!!
Mom (getting headache): I can’t believe you are acting like this right now. After I just took you to swim lessons and…
Daughter: WAAAAAA!!

And it goes on and on.

Mom: “Sweetie, why are you crying?”
Daughter: I’M CRYING BECAUSE OF YOU!!!
Mom: (engaging upstairs brain) “Wow, you sound really mad!”
Daughter: I am mad!
Mom: “Is it because we’re not going to Jason’s Deli and eating at home instead?”
Daughter: “Ya”
Mom: “That’s because we made plans to eat at home to save some money. But if we think together, you can help me decide what to make when we get home. We might be able to make something like they have at Jason’s Deli”
Daughter: “Like what?”

And with that, your daughter turns into a rational human again because you engaged her upstairs brain.

When kids get older, they may realize that tantrums get them exactly what they want.

How many times have you been tired and achy from a long day when your four-year-old starts crying to go to McDonalds?

And you’ve given in because you had no more strength to fight.

In our little moments of weakness, our kids learn how to manipulate.

This is not to say that you should never let your guard on.

But…you can take action in the moment.

When you see that your child wilfully has control of her emotions and has DECIDED to have a tantrum to get what she wants, you only have one choice:

As the authors of The Whole-Brain Child affirm, “Never negotiate with a terrorist”

“I understand you want the Elsa dress, but I don’t like how you’re acting and if you don’t stop this right now, I’ll need to cancel our movie this afternoon, because you are showing me you can’t control yourself.”

Knowing that these two different kinds of tantrums exist gives you choices and more control over the situation.

More control always leads to greater happiness as a parent.

You got this, mama.