You’ve set up a sticker chart.  You’ve given lots of praise.  Your toddler seems to drink more fluids than physically possible and yet… YET…

Trust me, you haven’t. 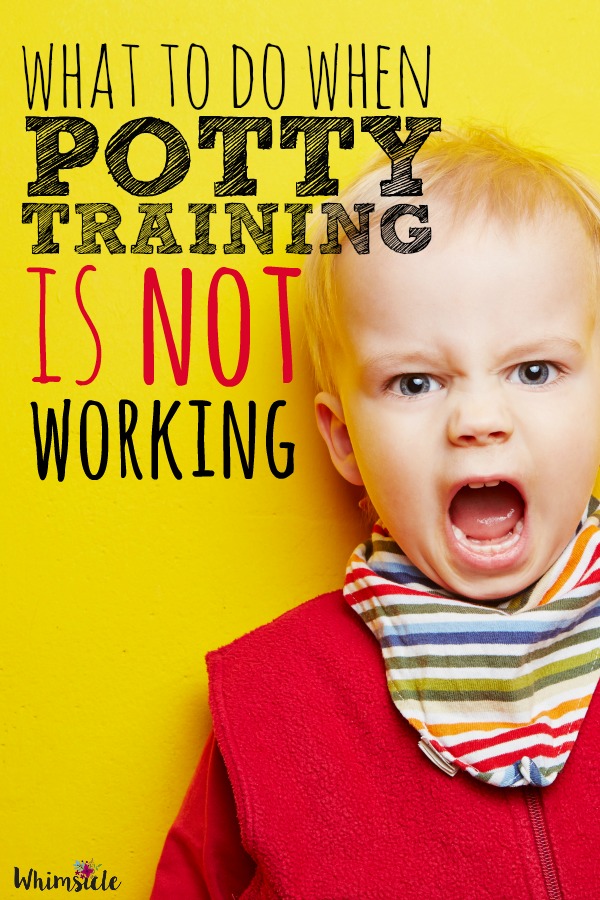 We see so many success stories and big promises like, “Potty Train Your 18-month-old in One Weekend” or the “24-Hour Potty Training Solution.” No wonder we are so hard on ourselves when the “proven” methods don’t work for our kid. It’s easy to get into that failure mindset.

I tried for six months to potty train my son.  He screamed, cried, yelled and vehemently refused to use the potty.  He would rather take a nap than use the potty.

But we’re not.  It’s OK to take a break.  Take however long you need.  Put the diapers back on.

Here’s what you can do when you are ready to try again.

Every single child is different.  I discovered that with my own kids.

You see, my daughter potty trained so fast.  I put her in two-pairs of underwear for the day, gave her tons of juice and had her sit on the toilet every 30 minutes.

She loved potty training.  She listened to me when I asked her to try and she was so excited about it.

Bear in mind, it was still one of the MOST frustrating experiences EVER. Cleaning up puddles of toddler pee will force anyone into a bad mood.

But at the end of the day, it was me with my glass of hard cider and a potty trained 2-year-old.

I thought that was how potty training went.  One hard day and DONE.

If you’ve had a horrific potty training experience, you can laugh at my naivete now.

Because, OH, my son.

We tried potty training him for the first time around Christmas.  He was almost 2 1/2.

It took 6 months – 6 MONTHS!- until he even agreed to sit on the potty.   That wasn’t even peeing on the potty, that’s just sitting on the seat.

If your child is throwing a fit and it seems more like a battle of wills than a teacher and willing student, it’s completely OK to take a break.  Your kid is just not ready and that’s OK.

Let’s repeat that, Your kid is just not ready and that’s OK.

Or maybe you’re not ready.  Here’s how to tell…

Knowing when YOU are ready to deal with Potty Training

As moms, we juggle a lot.  Especially if we have more than one child.

My son made such a commotion every time that I didn’t feel like fighting. Every scream and outright refusal created so much stress for me that I decided not to push it.

For a little while, I let him have his way.  I didn’t want him to associate the potty with a negative experience.

But then, after months, I became fed up with the crying.  I knew that he could master this toilet task and the crying was not so much fear (as it was a few months ago), but habit.

We know our own children.  We know the difference between their genuine fear and when they are playing us.  Or when they may be a touch afraid, but its something they can overcome.

“Too bad,” I replied with all the serenity I could muster, “You are wearing underwear today.  You need to use the potty or else the pee will run down your leg.”

Yes, I said that.  I was done.  A few months ago, I could have said the exact same phrase and still \ had to clean up a mess every 30 minutes.  This time, it worked.

This next tactic also made our training easier.

Cleaning up their own mess

According to the Montessori learning approach from the site The Montessori Notebook, “when a child has involvement in the [potty training] process, the child has ownership in the process, too.”

For potty training, think of this as a joint effort between you and your child.  If they have an accident, they need to help clean it up.  This isn’t a punishment.  It’s about teaching responsibility for your own actions.

When I felt my son was ready to potty train again, I told him that if he had an accident, I needed his help in cleaning it up.

On the first day of our FIFTH attempt at potty training, he sat the kitchen table, digging into his raisin bran when he suddenly stopped mid bite.  He looked up at me, slightly terrified, and panicked, “Mommy, I peeing.”

I ran over to him, picked him up and carried him to the bathroom.  There was a puddle on the bench and a little trail of droplets leading all the way to the bathroom door.

While on the potty, I told him, “It’s OK you didn’t make it in time. Now I need your help cleaning it up.”

No shame attached to it. Just a simple, this is what we need to do now.

Once we changed his clothes, he helped me place paper towels over the puddle and then used his foot and paper towel to absorb the little droplets.

This step made both him and me happier.  I no longer felt like potty training was one more task that was solely my responsibility.  He took more ownership over his accidents which led to less accidents.

Getting a Smaller Potty

I discovered through my six months of potty training attempts that my son was afraid of the large potty.  So not only was he trying to master getting the urine out but he also was trying to control his fear of the loud noise and falling in.

So we brought the smaller toddler potty to our upstairs bathroom.  He could use it on his own without the help of the stool.  He felt more in control.

The first few times he tried, I turned on the bathroom faucet and let him watch “Peppa Pig” on my cell phone.  He sat for about 20 minutes before I took him off and we decided to try again.

I noticed that with the smaller potty, he was more willing to try again in 30 minutes.  He could open the lid himself and sit down by himself.  The small potty was a game changer.

Now that you have your child using the potty, here’s what you can do to make sure they keep doing it.

Find What Drives Them and Use It Consistently

There will be one driving force that encourages your child to use the potty.

Some kids don’t want to wear diapers anymore.  Others want to be seen as a big girl or boy.

My son doesn’t like the pee running down his leg.

That’s what I use.

“Are you sure?  You don’t want pee running down your leg”

“UHHHH…. OK, I try,” and he reluctantly trudges to the potty.

It works for him every time.  I don’t change my script.   I keep reminding him of this consequence that he hates when he can’t make it to the restroom in time.

Find what your child wants (or doesn’t want) and reinforce this with each bathroom trip.  Pretty soon, he or she will internalize it and that will lead to him or her making better decisions about when they need to go.

This process is frustrating.  It’s maddening.  It’s disheartening seeing other kids potty trained so fast and yours lagging behind.  But we are not behind.

Every child develops in his or her own time.

If you are having a hard time potty training, don’t blame yourself.  Just know that NOW is not the time and it will happen.

You are an awesome parent.

Now, what to do about those temper tantrums that are driving you berserk? Read on.