Your child talks about playing alone at recess.  He shrugs it off when you ask more questions and immediately you are worried if something is wrong. You may think, “I wonder if my child is being bullied.” Here are five ways to tell. 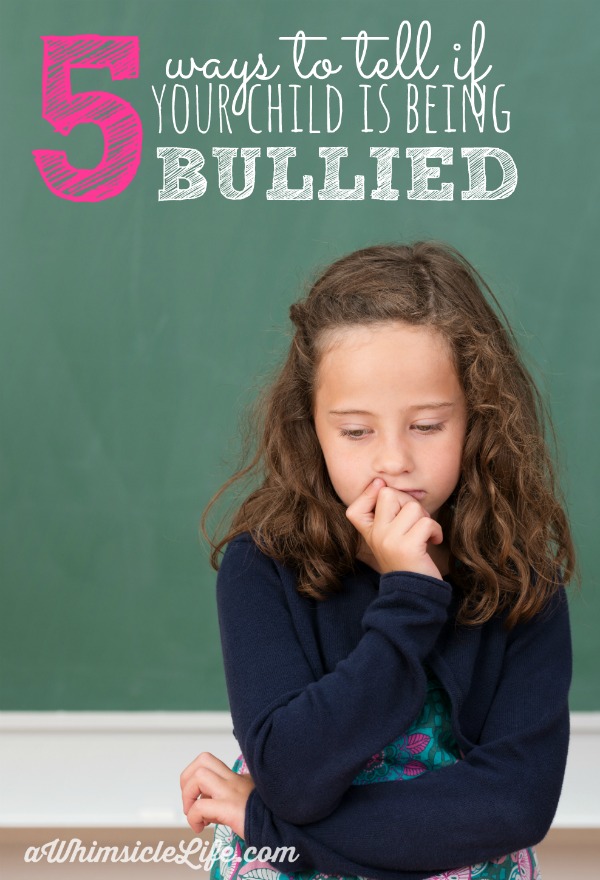 First, let’s define bullying.  When a child is bullied, it is an ongoing process, not just a one-time taunt on the playground.  Bullying is merciless and is not just a physical threat but can also be name calling, regular exclusion (social isolation), inappropriate touching or just constantly “messing” with another person.

Many teachers don’t see bullying because kids are smart enough to do it when adults aren’t looking.  Bullying victims don’t usually tell an adult not just because of a fear of retaliation but on account of the deep feelings of shame that bullying creates.

I can speak about bullying both as an educator and as part of my personal experience.  I was bullied in middle school.

Let me tell you my story.

I started 7th grade incredibly excited and a little bit nervous.  I went to a very small, parochial school for elementary school.  There were only 12 students in my sixth grade class.  We all knew each other.  We were all friends.

For 7th grade, I moved to a large public school. Every week that summer, I asked my dad to drive by the middle school building – a massive two story structure that I couldn’t wait to explore.  I imagined school to be like TV.  I would have a locker, tons of friends… it would be awesome.

And it was awesome, for the first few weeks.  I made some new friends, including one girl named Jessica who was in my PE hour.  We chatted during class and said hi in the halls.  One afternoon that all changed.

We were walking in from PE after running the mile.  Jessica was beside me, talking about something, probably the next class, when all of a sudden another girl named Sara called out to her.

“Jessica, come here!  I need to tell you something!” she yelled.

Jessica ran to her and Sara whispered in her ear.  While they were talking, their eyes darted toward me and then back to the ground.  They burst out laughing and looked back at me again.  I kept walking.

Jessica never walked back to join me.  I entered the locker room alone.  And it only got worse from there.

Each time I saw Sara in the hall, she would look away and start whispering to her friends.  Pretty soon, other girls started to do it too.  People refused to sit next to me in class.  Then finally, I heard the reason, as one boy sitting next to me in Social Studies whispered to another,

Now at 11 years old, deodorant was a relatively new concept to me.  Arizona is hot and I had grossly (no pun intended) underestimated the impact of intense heat on my adolescent body.  I heard his comment and I was mortified.  I fought hard to keep my composure during the rest of the class.  To act normal. To keep the tears at bay.

During passing period, I ran to the restroom and yanked the tube of Teen Spirit from my backpack.  I fixed the smelly problem right there.

But the isolation didn’t stop.  I could still feel people talking about me.  I had two friends my entire 7th grade year and if they weren’t in a class with me, I was screwed.  Totally alone.

I was also awkward and shy so making new friends and overcoming this experience was incredibly difficult for me. I’m sure I gave the other students a lot of ammunition for teasing.

Loneliness consumed me. I  entered each class as late as I could so that I wouldn’t have to talk to anyone. I didn’t tell my parents or any teachers because of how ashamed I felt. I placed the responsibility for the bullying squarely on myself.  It was my fault.  I was the weird one.  I was the one who smelled bad.  I mistakingly thought that if I told my parents or teachers, they would realize those things about me too and I would be rejected further.

When this is the thought process of a bullying victim it is near impossible to figure out that bullying is occurring.  However, bullying does create other observable changes.  If you are concerned that your own child is being bullied, look for:

This can go either way.  Kids who are bullied may stop eating lunch at school and be famished when they get home.  Lunch is a social time and if your child is afraid of being mocked, teased or simply sitting alone they may tell others they’re not hungry so that they skip the cafeteria time.

For me, I went the other direction and found solace in food.  Eating was the only thing that made me feel better – particularly sugar.  I binge ate.  My parents would find little candy wrappers scattered all over my room and I gained weight.

Bullying makes it difficult to concentrate in class.  When a kid’s brain is devoted to worrying what peers are saying about her, there is little mental energy left to absorb class material.  As a parent, be aware of an abrupt change in your child’s academic performance.

I went from a straight A student in math to receiving F’s.

If your child fights you every time you bring up school and complains about it constantly, that is a sign that something might be wrong.  It might be bullying or it might be some other difficulty.  Nonetheless, its a warning sign that definitely warrants further investigation.

If your normally happy kid becomes suddenly moody, depressed or anxious, that could be a sign of either adolescence or that something is bothering her.  During 7th grade, I was a horrible person to be around.  I picked on my little sister and purposely tried to exclude her.  I wasn’t nice nor accommodating, frankly because I felt so horrible about myself and projected that mood on other people.

When kids can’t see another way to handle bullying, sickness is the next option.  Anything to get out of going to school.  I was so good at faking illness.  I managed to convince my parents that I was sick once a week.  I would rather sit at home with the comfort of junk food and the television instead of be at school alone.

Would I have rather gone to school, succeeded and had tons of friends?  Of course.  But I couldn’t find any other way out of my situation.  That’s the way many bullying victims feel.  They can’t see a way out.

Thankfully, my story has a happy ending.  I found a group I fit into: leadership.  In my eighth grade year, I joined Student Council as a representative.  I am so grateful that I could simply volunteer and no elections were required because that club literally saved me.

I went to school dances and worked the snack bar the entire time.  While this may seem like a cop out, I loved it.  People love you and thankful when you are giving them food and candy.  They talk to you.  They include you.  Serving others can be a wonderful thing.

I found a way out of bullying, but some other kids are not as fortunate.  As adults, we can look for warning signs.  Find an entire list of warning signs HERE.  To read more about what you can do about bullying check out StopBullying.gov.