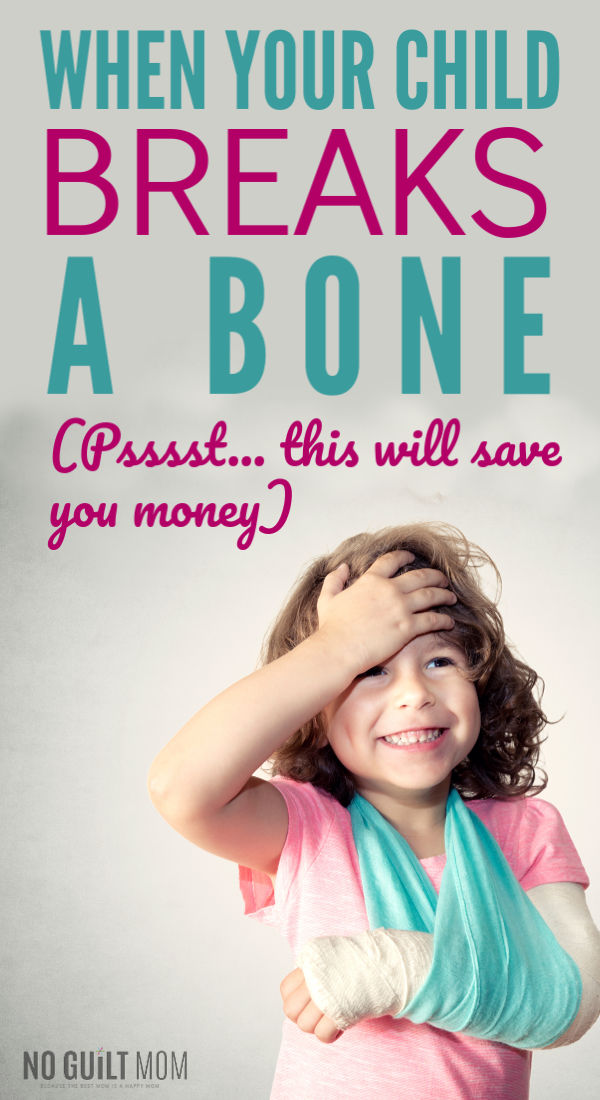 He lay there screaming on our kitchen floor with his arm twisted under him.

I panicked and picked my son up from the floor.

Seconds earlier, he was chomping on grapes while kneeling on the bench at our kitchen table when he turned around to ask me a question…

That’s when he lost his balance and toppled onto our tile floor with his arm pinned underneath him.

I rushed over and picked him up. Unfortunately – or fortunately, depending how you look at it – I’ve had experience with him breaking his arm before.

It didn’t look swollen or red, but I remembered from the last break that he couldn’t grip anything.

I placed a few raisins on the table and asked him to pick them up.

He reached out and tried to grab it, but couldn’t. It hurt.

Oh crap. This is a break.

If you ever find yourself in a similar situation, here’s what to do.

Even if its after hours, your pediatrician’s office most likely has an answering service that will connect you to a nurse.

Describe all the symptoms to the nurse who answers your call. She will either direct you to go to the ER or to an urgent care.

Usually, you don’t need a hospital

This was my big mistake when my son broke his arm the second time – I thought it was an emergency (again) so I went directly to the ER at the Children’s Hospital.

However… what I didn’t know is that my son needed an ER for the first break because of his age at the time – he had just turned 1 (That’s a story you REALLY need to read).

Now, he was 3. Since no bones were poking out and I could see nothing life threatening about his injuries, all he needed was an urgent care with an X-Ray.

If I knew that, I could have saved hundreds of dollars and hours spent waiting at an ER where we were clearly – and thankfully – not a priority

Not all urgent cares have X-ray machines though, so it’s best to either:

Pack some food (for both of you)

As a precaution, don’t let your child eat until he is seen and the doctor gives the OK. As a heads up, you might be in a for a long wait.

Not all urgent cares have vending machines. And if you had to go the ER, once you’re in the room with your child, it can be hard to leave.

With this last break, we were at the hospital for 6 hours. I didn’t pack any food and I was starving.

Thankfully, while at the hospital – since your child is a patient – you can ask either where you can get food or the nurses will bring food to you.

We were lucky and got little boxed lunches with turkey sandwiches, a juice box and some cookies.

Still, I wish I would have brought my own food because when we got those lunches, I already had a headache and a serious case of the “hangries” developing.

Need some quick snack ideas? Here’s 50 of them!

Get ready for X-rays

With broken bones, it’s the X-ray that tells all. In my experience, medical professionals will not make a diagnosis until they see the films because sprains and small breaks can produce nearly identical symptoms.

If your child is in pain or frightened, it can be incredibly difficult to get that image at all.

At the children’s hospital, they had a portable x-ray machine that they wheeled into the room. However… HOWEVER…

They had to wheel in twice, because the first time my son moved and they couldn’t get a clean shot.

When the doctor reviewed the image, it confirmed what I suspected: a small, hairline crack right around the elbow.

There won’t be a cast at first

You see it on TV – someone breaks their arm, they come home in a cast.

Initially, after the break, the area around the broken bone swells. Casting would be counterproductive because after a few days, the cast would fail to hold the broken limb stable.

Instead, they splint it with a stiff pad to stabilize the arm and then wrap it with white bandage – which, oh my goodness, gets so, so dirty.

They will then refer you to an Orthopaedist who you’ll need to call and set up an appointment for a week later to cast the limb.

Your child gets pain meds

Even though he comes home with a nifty splint, he’ll still be in pain – which is so hard to watch.

Thankfully, you’ll probably also come with pain meds. We got liquid hydrocodone/ acetaminophen. It made my son extremely loopy, so we only used it for a day before switching to ibuprofen. Totally better than seeing him in pain though.

Now you know what to expect…

It’s never fun to see your child in pain and it’s always scary when they need more than the basic first aid.

However, now I hope that I’ve equipped you with the knowledge so that when one of your children breaks a bone, you’ll at least be able to save a bit time, money and stress.