Welcome back to my fabulous sister-in-law Melissa Crohn!  She inspires me all the time with her creative date ideas.  This time, she tackled the Murder Mystery Dinner.  Take it away, Melissa!

Six months into our first child’s life, my husband and I couldn’t come up with a single idea for a date night beyond dinner and a movie. We would ask ourselves, “What did we do back when we had free time and full nights of sleep???” Cue input from the Whimsicle Moms and my guru sister-in-law herself: how about a murder mystery dinner! A creative date with no planning on my part? I was sold!

My husband, however, was not as easily won. He didn’t know what to expect out of a night that promised forced interaction with strangers and (gasp!) people in costume. But I won him over, we both had a blast, and now I am able to ease the fears of the similarly wary with 5 good reasons to give a Murder Mystery Dinner a try.

1. It’s an excuse to get dressed up for each other.

Our murder mystery dinner, hosted by The Murder Mystery Co. at the Old Spaghetti Factory in downtown Phoenix, had a masquerade theme. The hubs and I got dressed to impress, bought some cheap sparkly masquerade masks at Hobby Lobby, and spent the evening feeling fancy! We are generally too tired or lazy to put much effort into such things, so this was a great excuse! 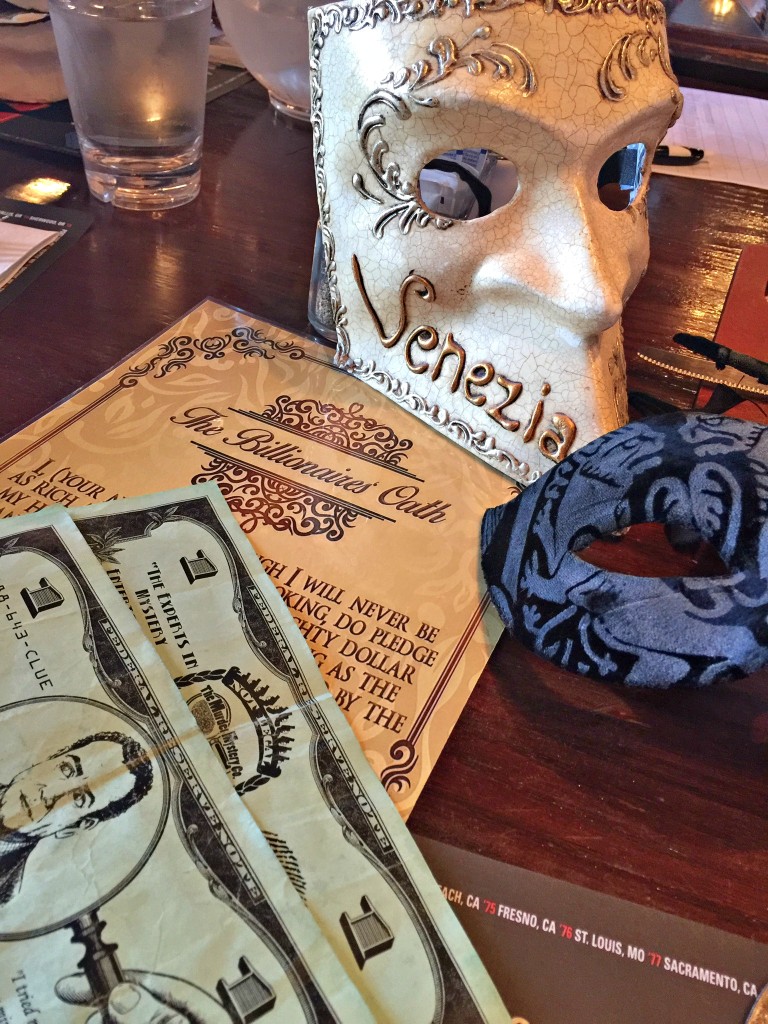 2. It’s a great opportunity to interact with your spouse on date night, and in a completely new way.

When the hubs and I go to dinner and a movie, we enjoy each other’s company for an hour and then sit in silence in each other’s general vicinity – not much connecting going on beyond a squeeze of the hand or tussle over who gets to hold the popcorn. But at our murder mystery dinner, we got dinner and a show that still allowed us to interact.

When we arrived, we took goofy pictures in our masquerade-themed get-up and were then seated at a table already filling with other guests. We had about 20 minutes to meet the other members of our “team.” Once the “murder” was committed, we worked as an investigatory team, questioning suspects and puzzling out the guilty party together in two separate interrogation phases held between each of the three dinner courses. We were able to not only have our typical date night conversation while we ate, but we were engaged in creative problem solving and fighting crime as we digested! It was a whole new way to connect!

Before the “murder” took place, the actors of The Murder Mystery Co. mingled with their crowd and assigned a handful of guests roles to play “suspects.” And wouldn’t you know it, the hubs was chosen to play “Juan Tidman” (Get it? Juan-tid Man?), the social-climbing butler with access to the poisoned glasses presumed to be the murder weapon.

Now, while I would have geeked out over the chance to play a suspect, this was a bit outside my husband’s comfort zone. But it turned out to be no big deal; they gave him a script to refer to during any interrogation, so he could bring to it as much (or little) gusto as he felt comfortable. He did a great job! And it was super fun to circulate with him as guests demanded to know whether he had a good relationship with the murder victim, his wealthy boss “Sal.” 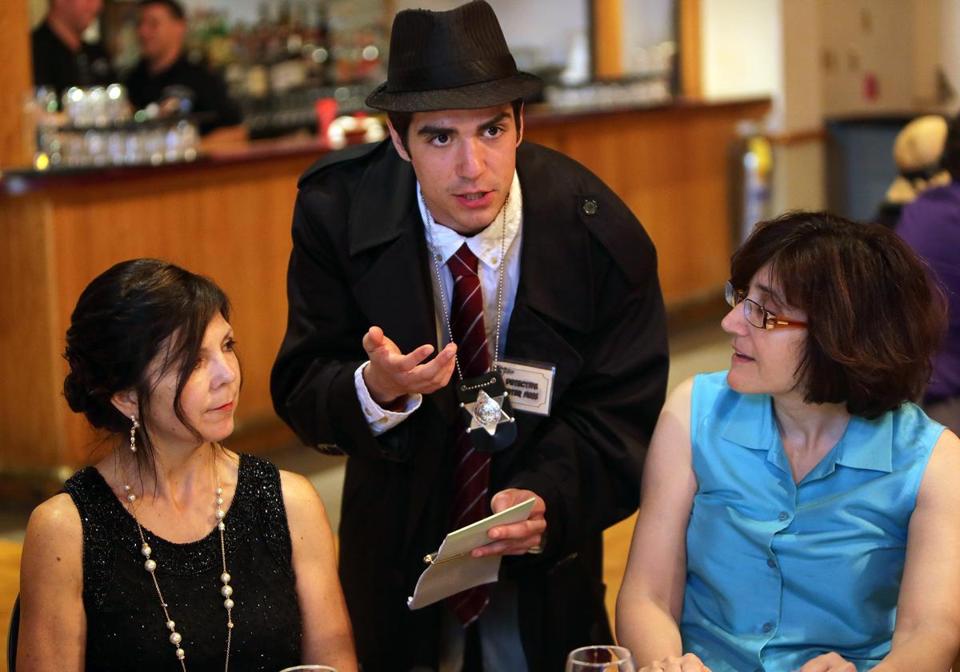 4. Stepping out of your comfort zone is good for you.

Interrogating, interacting and collaborating with strangers turned out to be a big factor in a fun night of bonding with my spouse. It got us out of our comfort zones and gave us a ton to talk about. “I knew Ella Vader was the murderer from the first round!!” and “Did you hear the your mom joke I made to one of the actors?!” were a part of the boisterous debrief on the 30-minute drive home from Phoenix.

The “social interaction” component of the evening was also heavily facilitated, a big help to those of us on the shier side. Each guest was given a list of questions recommended for the interrogation phase, and The Murder Mystery Co.’s actors did a great job of stirring up the crowd, sparking new conversations, and making us laugh. By the end of the evening, we all felt proud of the winners who correctly identified the murderer or received awards for being “best dressed” or “best suspect.”

I know, I know, this makes me sound like I’m 90 or 12. But let’s be real. Parents have tiring lives and rest matters, so the fact that we could have a blast on a date and still be home at a reasonable hour to get a full night’s sleep is a definite bonus!

Moral of the story? There are definitely ways to continue to date your spouse after children, and a murder mystery is one of them! Happy dating! 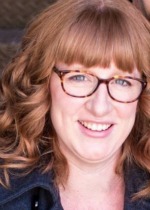 Having many careers in her life, Melissa Crohn is now a high school English teacher and loves to write and journal in her spare time.  She’s enjoying life as a new mom to a baby boy.