You are fed up. After doing so much for your kids, they still throw a tantrum when they don’t get their way. Here is how to change spoiled behavior in your kiddos. 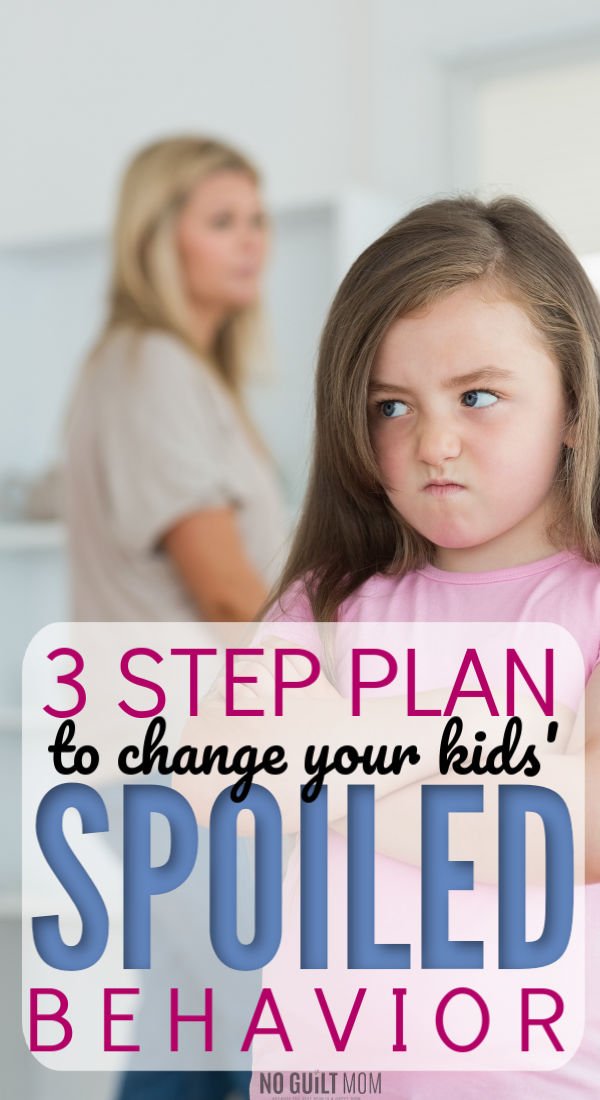 How can our kids go from fun, happy child one moment to spoiled demon the next?

And sometimes it seems like the easiest course of action for us is to give in.

We’re exhausted and we feel guilty – guilty for having to work or for spending too much time with their siblings- that when we’re around our kids, we don’t want to ruin the fun.

But, what else can we do? The more we give in, the more the spoiled demon emerges and pretty soon, we’re at the whim of our kids emotions.

And that is NEVER fun.

Read: How to deal with a grumpy child: 5 positive actions to help with whining, sulking and pouting

When your kids act spoiled

This past weekend, we went to an AZ Diamondbacks baseball game as a family.

It was an amazing experience, because that night was Outstanding Student night. My daughter had made Principal’s Honor Roll and was invited to walk on the field.

After that, we got ALL the baseball food – hot dogs, pizza, visited the kid’s club playground and enjoyed the game.

At Chase Field, they have this one big screen that displays fan photos. Basically, you take a photo, post it on Twitter with the hashtag #LetsGoDBacks and hope it’s selected.

It’s a little game we play everytime we go to the ballpark. 9 times out of 10, we can usually get our picture up there.

This time was no exception. Up on the screen flashed a picture of my daughter and I on the field.

She took out her camera. “I’m going to get a picture of it on the screen.”

The photos cycle through between each inning, so she definitely had a chance.

But then, her battery died and she begged me to get a picture.

I stared at the screen with my camera ready – repeatedly through 4 game play breaks.

It didn’t appear, so we got ready to leave.  We walked up the stairs to the main concourse. At the top, she burst into tears.

And I was pissed…

What should you do in this situation?

Read: How to Deal with Temper Tantrums Like a Boss &#8211; Even When Your Kid is Past the Toddler Stage

Ignore it until you can…

Often, we take spoiled behavior personally. We tell ourselves, if only we spent more quality time with our kids

…or taught them to give more to others

…or didn’t allow them to have so much stuff.

Stop. All this is complete BS.

There is no child who has never had a complete meltdown.

And this is what I want you to tell yourself as you’re fuming.

As my daughter cried huge elephant tears, I thought:

I can’t believe her. We came to the game because of her. She got her own personal pizza, walked on the field and now she is complaining about… THIS?

Honestly, it put a damper on the entire night. I couldn’t even think of handling her metdown until I got my own emotions under control.

However long it takes, give yourself this time. Tell your child upfront, “I’m really upset right now and I need time to calm down.”

For me,  it took me half-an-hour until I felt calm enough to discipline.

Instead of saying I’m sorry, say…

I know you feel disappointed.

Oh man, that people pleaser in me so wanted to apologize for not a getting a shot of that picture on the big screen.

But I held firm.

I had stayed in my seat staring at the big screen between innings, camera ready, waiting for that Twitter shot to appear.

Sweat ran down my face. My body ached as my 5-year-old son hung on me, and yet I did it.

Of course, she was disappointed. I get that.

But, disappointment is not a valid reason for making everyone else’s lives miserable.

My son had his own disappointment story this past week.

While his sister was in dance class, we went to the mall to return a ripped backpack. He was awesome and patient during the return process, so I said yes to riding the mall merry-go-round.

Then he asked to go to the bookstore.

So we sat in Barnes and Noble and read Peppa Pig, Max and Ruby, the Berenstein Bears, until I announced we had to go.

He shoved a book under his armpit and prepared to walk out of the store. “Ok, I’m ready”

“WHY?!!” he moaned. I took him by the hand and dragged him out of the store as he stomped and cried.

Once we reached the parking lot, I had had enough.

I leaned down to him and said, “I know you feel disappointed, but you had fun at the mall, and now you are making it hard to walk to the car.”

His face screwed up a little tighter.

“I’m sorry,” he whimpered back.

And then, I offered him a chance to redeem himself.

“Let’s see a do-over. Show me how you walk to the car without stomping and pulling.”

Yes, he was still disappointed, but his tantrum stopped. He walked without any extra load on me.

When my kids have tantrums, my plan always includes:

Does this work all the time? Nope.

Sometimes, their brains are so overloaded with emotion that it’s best to allow them time to cool off and gain back a little control.

Most of the time, the do-over makes any further discipline unnecessary because they’ve already rectified their behavior.

When our kids act spoiled, it can be incredibly difficult to NOT take it personally,.

When it happens, remember to give yourself space to calm down, don’t apologize, and follow your tantrum game plan of explaining the behavior, telling how it effects you and then offering a do-over.

Parenting is far from easy. You got this, mama.