I hate conflict, but sometimes it’s inevitable. Has your kid ever come home from school and told you something about the teacher that you’ve found questionable?  Perhaps the teacher said something strange or you disagree with how a problem was handled.   Whatever the case, you are concerned.  Here’s how to handle the potential conflict in the least drama filled way. 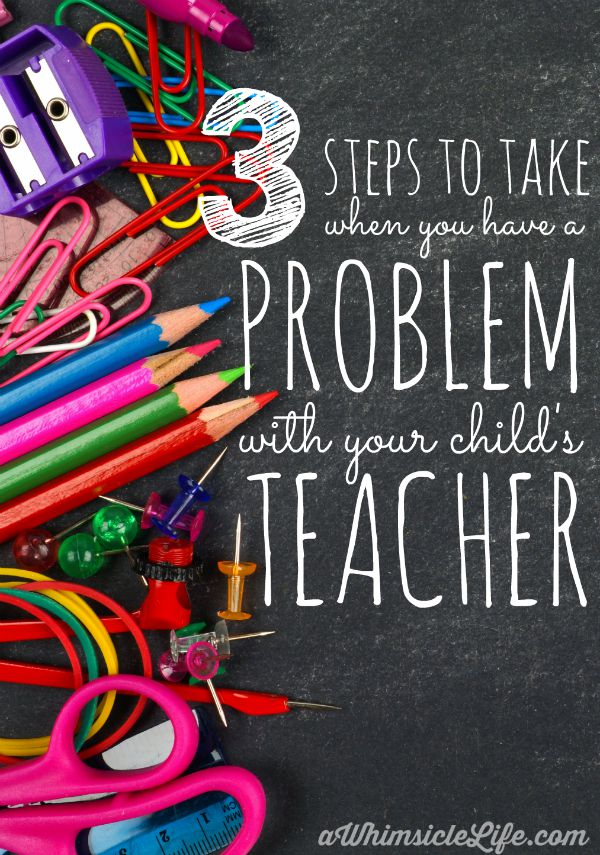 As a former teacher, I loved it when parents called with concerns.  Sure, at first my stomach dropped down to my feet when I realized they were calling with an issue, but ultimately I appreciated that they came to me with the problem.

For instance, one school year, my class did a science experiment where we observed the effects of moisture on bread.  Yep, we watched mold grow.  I had a few rowdy boys in my class that year.  One afternoon, one child opened up their ziploc baggie full of moldy bread and taunted his partner with it.  I told him, in a rather ominous voice, that you shouldn’t breath in mold spores as they could be dangerous to your health.

I oversimplified because I wanted him to stop opening his bag. Unbeknownst to me, a very sweet student had also opened her bag to look inside.  That night, she panicked to her mother that she breathed in mold and would now get very sick and die.

Thankfully, mom picked up the phone and called me to find out what happened in class.  Mom was concerned, but once I explained the situation, she understood. I talked to the student the next day about my reasons for making the comment, how she wouldn’t die and all was well.  I’m thankful her mom called because we were able to deal with the situation quickly and efficiently.

Pinpoint exactly what concerns you

Personality clashes happen.  If someone rubs me wrong way, but I can’t pinpoint a specific issue, I just let it be.  It’s impossible to get along with everybody, all the time (as much as I would like to because I am definitely a people pleaser).  However, if you can say to yourself, “I really don’t like that the teacher did this because it impacts how my child learns in the classroom,”  you definitely have a cause for concern and you should address it.  Mainly, because it’s probably a miscommunication that can be cleared up quickly.

Here’s where most people stop.  I say to call the teacher, not send an email or note.  So many good intentions get lost in the written word.  When you talk to someone, you can hear concern, respect and kindness when you discuss problems.  Whenever I read about a problem in an email, all I can hear is anger and blame.

To start the conversation, I would simply say in my friendliest voice,

“Hi Mrs. Smith, it’s JoAnn, Susie’s mom, how are you?”  and then “Hey, I’m calling because Susie told me (insert problem here)”

I then pause because usually the teacher has additional insight into the situation.  Nine times out of ten, the whole situation ends up being a misunderstanding or something taken out of context- which makes a phone call completely worth the time and effort!

Follow-up on conversation through email

Send a quick email when you get off the phone.  This can serve as a reminder for what both you and the teacher need to follow up on.  I would write:

Great chatting with you the phone today!  Thank you so much for talking with me about the concern over Susie in Science class.  I realize that Susie misunderstood what you meant when you were talking about the dangers of mold.  I’ll talk to her some more at home.  I appreciate you taking the time to follow up in class with her as well.

You now have a written record of addressing the problem and a reminder of exactly what you talked about.

When you Need to Call the Principal

With very, VERY few exceptions, all the teachers I’ve met have been a pleasure to work with and are always willing to cooperate with a parent to promote a child’s best interests.  If you find that your child’s teacher doesn’t respond to your phone calls, isn’t willing to try out other solutions, or isn’t following through with anything you discussed, I definitely recommend calling the principal.

Don’t think of it as being the “Complaining Parent” or that your issue isn’t worth the time.  Perhaps the principal knows about an issue affecting the teacher or can help be an intermediary. As long as you approach it as trying to find a solution to a problem, the principal will be more than willing to work with you.

Most problems with teachers are due to simple misunderstandings.  By pinpointing the problem, calling the teacher and following up through email, you set up an awesome professional relationship with your child’s teacher.